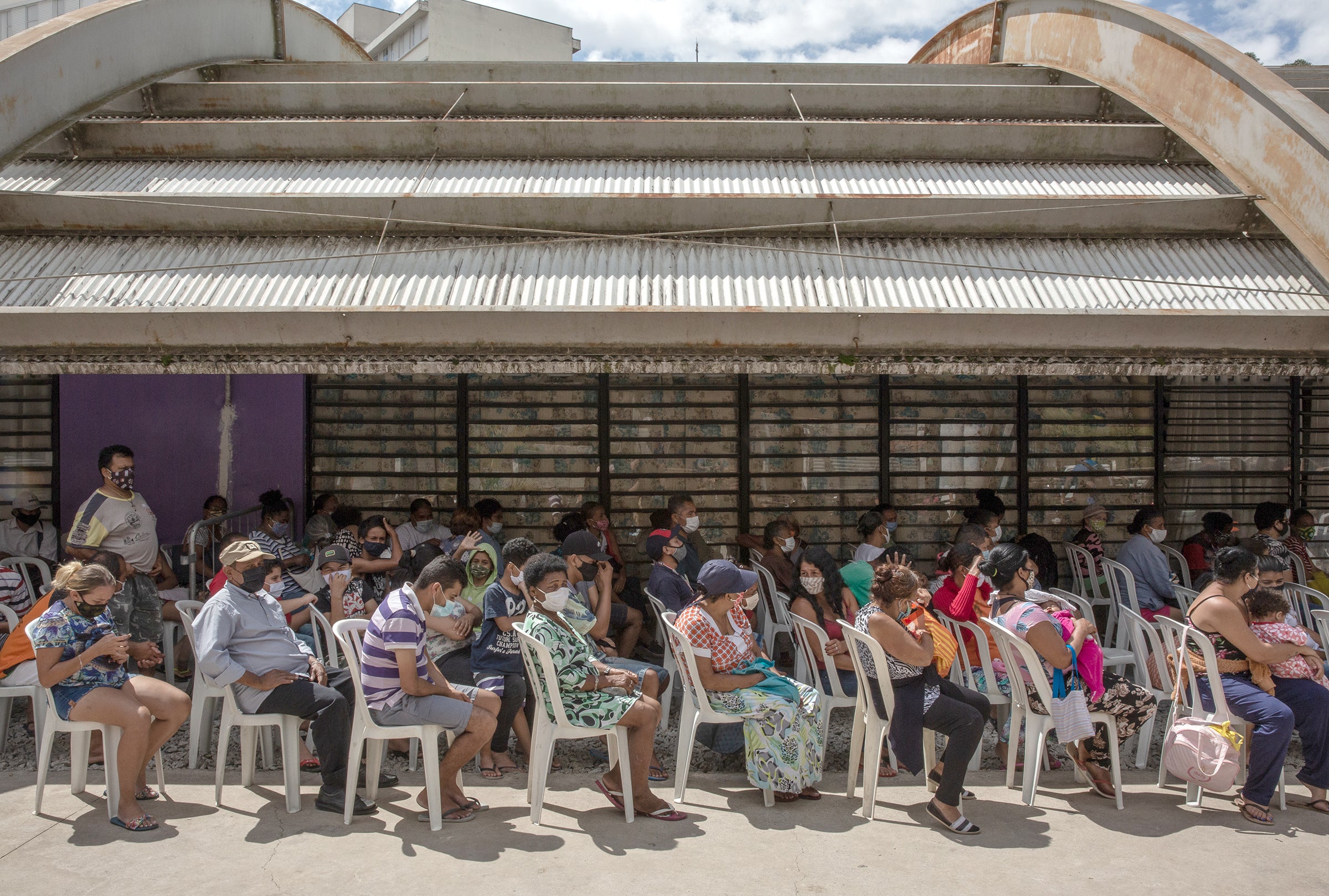 To be in Brazil right now feels like being trapped in the middle of a chaotic battlefield, a 14-month-long siege, without anyone in charge on your side of the trenches. Totally surrounded by a lethal enemy that keeps getting closer to you and your family. This biological foe keeps morphing in a way that seems well adapted to infect everyone within reach, showing mercy neither for pregnant women nor for their newborn babies.

After 12 months of such a brutal biological warfare, more than 390,000 Brazilians have perished; the number of fatalities climbed to more than 4,000 fatalities a day in early April, and the number of new cases per day edged above 100,000, filling hospitals to capacity with tens of thousands of terminally ill patients who occupy all available ICU beds in a country that has one of the largest national public health systems in the world and more hospitals than the U.S. Such a steady tsunami of severely sick patients has led to an unprecedented collapse of the entire country’s health system and the setting of yet another pair of world records in terms of both infected and deceased health professionals. On top of that, the country’s stock of medical equipment and the supplies required to intubate patients in need of respirators to survive are running at a historic low and may run out completely because the federal government simply failed in the process of replenishing the national stockpile several months ago.

This, in a nutshell, is the catastrophic and unprecedented hecatomb that Brazil found itself locked in by mid-April 2021. A devastating second wave of the pandemic began to engulf all five regions of the country back in early November 2020. It resulted, in part, from the premature and chaotic relaxation of social isolation measures that had helped at least some regions of the country contain the worst of the initial phase of the pandemic. It worsened because of the large public political rallies that preceded the two rounds of the 2020 national elections, generating a multitude of superspreader events all over the country. And the situation was exacerbated by Christmas and Carnaval, the largest national festivity.

To make matters worse, Brazil is in the grips of a new variant of the SARS-CoV-2, known as P.1, which emerged first in the country’s Amazon region. After wreaking havoc all over the city of Manaus, the area’s largest metropolis in, the variant quickly spread all over Brazil during the first three months of 2021. At least 2.5 times more transmissible than the original virus, the P.1 variant provided the final push to transform the second wave into a true tsunami that has brought the entire country to its knees and triggered the largest and most devastating humanitarian crisis in Brazilian history.

By early March, hospitals were no longer collapsing in Manaus alone, but also in the richest metropolitan areas in the South and Southeast regions of Brazil—cities like Porto Alegre, Florianopolis and, most worrisome of all, the city of São Paulo. With its metropolitan area serving as the home of more than 23 million people, São Paulo proudly showcases the largest hospital and medical infrastructure not only of Brazil or Latin America, but of the entire Southern Hemisphere. Its private hospitals are second to none in the world, and the quality of its health care professionals is nationally known.

Yet, none of these facts prevented São Paulo from being submerged deep into the waters of the tidal wave that came crashing to its shore from all directions of the country. From big and small cities in the countryside of the state of São Paulo, and from other states in the country, a hoard of terminally ill patients soon required close to 93 percent of the ICU beds available in the city, virtually leading its entire hospital system toward a total collapse. According to weekly reports issued by the respected Oswaldo Cruz Foundation, most major Brazilian cities experienced the same type of crushing demand on ICU facilities.

The sheer number of patients, and the consequent overcrowding of ICUs and hospital infirmaries, the lack of basic medications and respirators, and the total exhaustion of health professionals took their toll on the pandemic outcome. In São Paulo, seven out of 10 ICU patients that were intubated during a recent  four-week period did not survive. In some states in the North and Northeast, the death rate reached a surreal nine out of 10 intubated patients. Since the pandemic started, Brazil has seen the percentage of deaths among infected pregnant women grow steadily, reaching a staggering 12.7 percent in some parts of the country.

More than 1,600 babies have died so far because they were born prematurely or because they were born with COVID and died of later complications, a rate 10 to 20 times more than in the U.S. and the U.K. And if there was any doubt left that the pandemic has led to profound structural changes in Brazilian society, one has only to mention that it is very likely that, for the first time since reliable records have been kept, Brazil may soon register more monthly deaths than births. Dropping from an excess of approximately 126,000 more births than deaths per month in 2019, this number reduced to an average 96,000 more monthly births than deaths in 2020.

In March of 2021, this surplus dwindled to only 46,000, but in states like Rio Grande Sul and cities such as Rio de Janeiro deaths have already surpassed births. The rest of the country may soon follow this alarming shift. The number of daily deaths is now so overwhelming that even São Paulo’s numerous cemeteries and crematories are struggling with the dramatic increase in demand, raising the question of whether the country may not be able to handle the bodies of pandemic victims properly if the situation continues to deteriorate.

In the middle of all the horror and suffering triggered by this still-unfolding human tragedy, the federal government and, in particular, the president of Brazil, has done virtually nothing to mitigate the situation.  Rather, the opposite has occurred: President Jair Bolsonaro voluntarily played the part of the virus’s best ally on many occasions. Bolsonaro has defended the use of preventive medications, such as hydroxychloroquine, which do not work against COVID. He has campaigned feverishly, even filing a petition to the Supreme Court, against any form of social isolation, or the widespread use of masks, and he has spectacularly fumbled key attempts to procure the tens of millions of vaccine doses that Brazil needs.

Bolsonaro, who now faces more than 100 calls for impeachment and a legislative inquiry into his performance, has become the greatest ally of Sars-CoV-2, not only in Brazil but around the world; a true Public Enemy No. 1 in the global fight against the COVID-19 pandemic. I say this because, in his failure to properly manage the Brazilian crisis, Bolsonaro’s inept, incompetent and potentially criminal conduct—as a commission from the Brazilian Bar Association concluded in a recent official report—has created the conditions for Brazil to become one of the largest open-sky laboratories in the world, allowing potential Sars-CoV-2 mutations to spawn in an almost unimaginable number. And with such an explosive number of mutations occurring all over Brazil, the opportunity for brewing all sorts of variants of the virus, including more infectious and even more lethal ones, continues.

Once they emerge, these variants will have ample opportunities to reach neighboring countries throughout Latin America, and eventually the rest of the world, in a matter of weeks or months. The P.1 variant, which has contributed to the second devastating Brazilian wave, has now been detected in at least 37 countries worldwide—a veritable “biological Fukushima.” Like a nuclear reactor that goes into an uncontrollable chain reaction, the Brazilian tragedy shows all the signs of an emerging global threat.

In this context, the international community must respond to this major global threat by pressuring the Brazilian government to reverse its handling of the pandemic to bring down viral transmission, new cases and deaths as quickly as possible. For that to happen, the World Health Organization, and even the United Nations Security Council, should demand that Brazil create a national scientific task force with enough political and financial backing to handle all aspects of the country’s pandemic management. Such a task force should have the power to institute rigid social distancing measures, such as a national lockdown. It should also engage the international community to guarantee a significant increase in the supply of both vaccines and emergency medicines to Brazil as soon as possible.

The Brazilian government should be sternly warned that a lack of cooperation in this global effort to bring the pandemic under control could lead to further isolation of the country from the international community and even the imposition of tough economic sanctions. As much as it pains me to write these lines about the country I love so much, I do not see another way to deal with a president and government that voluntarily led Brazil to the greatest humanitarian crisis in the country’s entire history, while totally ignoring the tremendous suffering this tragedy has already imposed on the Brazilian people. The message to and from the international community should be loud and clear: we either get out of this together, or we will not get out of it at all.